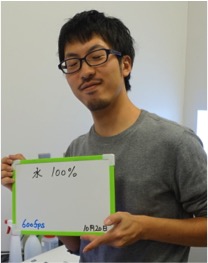 I study the locomotion of ophiuroids (also called brittle star) to develop robots that can move adaptively and robustly in undefined and unstructured environments. Ophiuroids are a kind of echinoderm similar to star fish, and propel themselves using five flexible arms. Ophiuroids can move in any desired direction, and their arms soft, i.e. they do not have rigid bodies with joints but are completely flexible. This allows them to be very adaptible to their environment, typically highly unstructured amongst corals and crags.
In addition to this, they can escape predators by means of autotomy, removing a part of a limb in the same way lizards drop their tails. Surprisingly, they don't have a centralized mass of nerves like brain in spite of their versatile motion. So we aim to elucidate decentralized control mechanism of ophiuroid locomotion by focusing on local sensor feedback.

I like to play baseball, and was active at in the student rocketry club.